John-George Nicholson is the father of two angelic devils, a South London enthusiast, who grew up in care. He likes to read, watch sports and have long baths. When he gets the chance John-George loves writing about a past that's forever influencing the man he's threatening to become. He has a particular interest in the ropiness of memory and the stories we all tell ourselves to make sense of this thing called life. John-George previously blogged at Own Two Feet.

This is part two of his blog Returning home to say goodbye. You can find part one here.

I tried so hard to bury the memories of the Halls and my time in their care. Then, a few years ago I bumped into Rebecca – their daughter. We spoke briefly and bumped into each other again. Very slowly we inched towards one another and two years ago I finally met Michael and Jenny again. I began to dig up those buried memories and re-examine our past: look back over old photos, remember. I painted a past that is fairer to us all because we all care, we all love, we all feel pain. As an adult you can learn to navigate pain, to take it in your hands and reshape it, to even turn it into something beautiful and powerful because there is a place beyond the pain we all deserve to get to, beyond hurt, even beyond healing.

Inside the care home I was met with smiles and a signing-in book. I told the lady on reception I was here to see Michael Hall. She kindly asked who I was and I stumbled to find an answer. At that point an older man and a young woman approached the reception. “They’re here to see Michael too – you can go up together,” the receptionist said, so I followed them into the lift. I never answered the question about who I was.

Inside we all introduced ourselves. The man said he was a friend of Michael’s from the church and had helped care for him. The young woman always smiling was his daughter. Alone at the reception I had felt exposed, but now in the lift with them I felt safe. The man kept talking. Asking questions about how I knew Michael. I told him I had lived with the Halls, but had only seen them once in the last twenty-three years. That was two years ago and Michael was already sick then.

We all walked into the room together. Michael was lying in bed looking at the TV surrounded by photographs of the family. One in black and white stood out – of Michael and Jenny when they were first married. Michael turned his head slowly to look at us. His eyes searching as he looked at me. Nothing. I was a stranger. “Maybe take off your cap,” the man said.

I remember one Sunday at the Halls’ when Michael went out for a walk before lunch. He returned with a homeless man he’d met in the grounds of the church. The man had been drinking and smelled pretty bad. He stayed for the roast lunch. Jenny (Michael’s wife) was not happy. I remember finding the whole thing quite weird and funny, but I also remember admiring Michael. I remember that feeling so clearly. Michael is a Christian, a serious Christian, but this wasn’t his Christian duty. This was simply Michael. His selflessness and kindness was not of words, but always of actions like this. To care, to give, to love: it came naturally to him. Before he left, Michael removed the homeless man’s shoes and socks and washed his feet.

Now, in the care home, I approach Michael and feel like the stranger he sees. I want to hug and kiss him like the others have just done, but instead I take his hands in mine. They’re soft. They were never soft before. Always hard and rough. These were always his primary tools. Building this. Fixing that. Constantly covered in scratches and cuts. Constantly in a state of healing.

I take out a photograph I’ve brought from home. Michael and Jenny. Rebecca, their daughter. My brother Nathan. Their nephew Sam. The two dogs, Lilly and Judy. We're standing in the garden. Flowers to our left. The big shed behind us. I’m back there. I’m the little boy. I want Michael to be back there with me too. Remembering. Smiling. But Michael can’t find a way back anymore. His dementia has locked all the doors shut.

He strokes my hand, 'cold' he says and rubs them. He's still here I think. Still caring. I look into his eyes, desperate to be remembered, but I'm not. He takes the photo but doesn't look at the picture. Instead he turns it over and strokes the blank white back of it repeatedly. I don't know what to do. I feel clumsy. I still want to hug him like I used to, but now I'm afraid.

In the next two hours the room fills with people that care. Michael's mind and body may now slowly be letting go, but his life holds on. I see his life and his love as strong as ever in the faces of the people in this room. He keeps living, keeps growing, his reach extended through his wife, sons, daughter, grandchildren, foster children, friends. It's a life of quiet greatness you won't read about in newspapers. I came here afraid I would be swallowed by sadness, but right now that seems impossible.

I never got to tell Michael I’m sorry how we parted all those years ago. Or how thankful I am for everything he and his family did for me. But in the two hours I spent with him and everybody in that room I realise that doesn’t matter.

On the drive home I drop off Michael’s daughter Rebecca. We talk the whole way back. When she says goodbye and closes the door and I’m alone, flooded by a wave of emotion. I feel a happiness that in that moment refuses to allow sadness in, there will be time for that. I feel a deep connection to my past, a deep connection to a life almost lost that’s coming back to me. I mattered. I was loved. The Halls were my family. The Halls will forever be part of my complicated version of family. 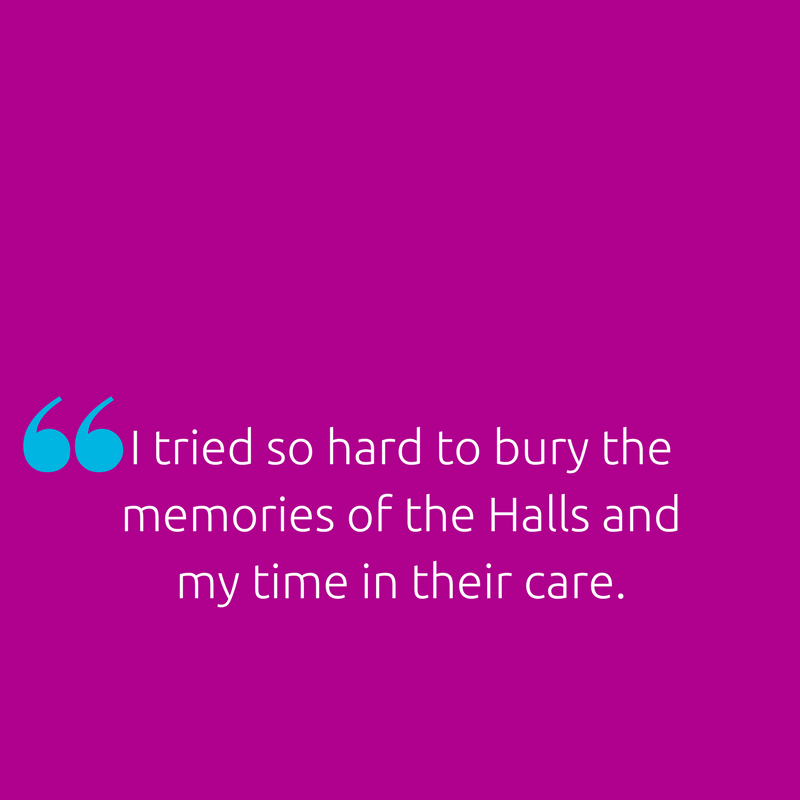